The Spirit Of Democratic Capitalism 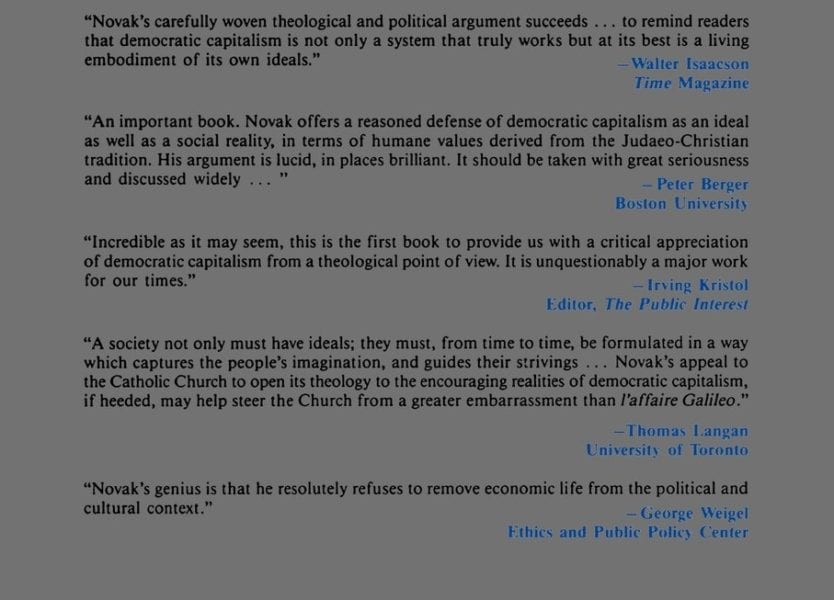 Michael Novak is a Roman Catholic theologian and was a committed socialist and this fact will have made him thoroughly acceptable to the Roman Catholic Church.  However, over a period of years in the 1970’s he changed his position to the support of the democratic capitalistic viewpoint.  This has not gone down so well with his church but, even under challenge this particular later edition reflects his more mature thinking and he has not felt to revise the main points of his thesis.  This book first appeared in an ‘underground’ form in Communist Poland in 1986 and has since been translated into a number of languages.  It has been described as ‘ground-breaking’ and it most certainly challenges the tendencies of the Christian church to lean in favor of Christian socialism.  The dominant strands of liberation theology consistently inveigh against capitalism but Novak’s thesis carries much weight and must be thoughtfully considered by those of us who seek to understand what best serves the nations of fallen mankind in general.  He shows that it is quite possible to draw from the Judeo-Christian tradition humane values that will regulate the impulses of the competitive markets and steadily lift the poor.  His arguments are clear as he seeks to prove that the democratic political system, and the spirit of discovery, creativity and competition in pursuit of a ‘better life’ that under-girds capitalism and the retention and promotion of the good in morals will produce the best for a world beset by the effects of the fall.  He notes that it is not possible for nations to become thoroughly Christian.  The effects of the fall will defile the best of intentions; the demise of communism is testament to that as is the systematic adjustment of the beliefs of those promoting socialism as the cure all for mankind.  Nowhere has socialism succeeded whereas democratic capitalism has though not completely. In a way, democratic capitalism is an American experiment.  It has been productive and has lifted multitudes.  It has not failed.  However, it will come, like all systems, under judgment.  That judgment will examine its abuses, in the political arena; in the mad pursuit of gain at the expense of competitors in the economic realm and the unwillingness to accept the restraints that Judeo-Christian morality and even what some call ‘natural goodness’ would seek to restrain it.  This is a heavy read, especially for those unfamiliar with even considering the theological implications of economics and politics.  I think that this author helps us, especially in the interconnections of these three realms and will make the reader think seriously.